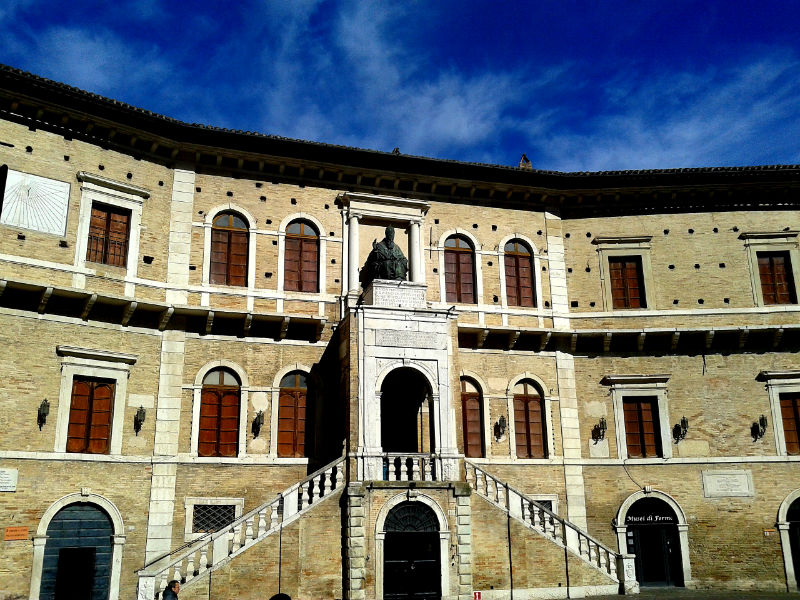 Built at the end of the thirteenth century, Palazzo dei Priori, the oldest palace in the City, was formed by the merging of existing buildings, which were unified by an imposing renaissance facade in 1500. This last has a double staircase topped by a loggia with a bronze statue of Sisto V, built in 1590 by Accursio Baldi.

Inside, located on the first floor, is the Picene section of the Archaeological Museum, preserving finds from the Fermo area which testify to the pre-Roman civilization of the Picenes from the 9th century to the 3rd century B.C. The second floor houses the Civic Art Gallery. Among the most important works are the famous late-Gothic miniatures with the Stories of Saint Lucy by the Venetian Jacobello del Fiore as well as important 17th-century works such as the famous "Adoration of the Shepherds" by Peter Paul Rubens and the "Pentecost” by Giovanni Lanfranco. Part of the route is also the jewel of the City: the prestigious Globe Room.

The Civic Library is characterized by the splendid globe, that has a diameter of 2 metres, designed in 1713 by the cartographer Silvestro Amanzio Moroncelli.

The majestic room  conserves the library’s oldest collection, composed of about 16.000 volumes, mainly of the 16th century, deriving mostly from donations of Romolo Spezioli, of Fermo, who was Queen Christine of Sweden’s doctor of confidence.

OPENING TIMES:
WINTER (October – May)
From Tuesday to Friday 10.30 am-1.00 pm / 3.30 pm – 6.00 pm
Saturdays, Sundays and non-working days 10.30 am -1.00 pm / 3.30 pm -7.00 pm
Closed on Mondays except during non-working days
SUMMER
JUNE: from Tuesday to Sundays 10.30 am -1.00 pm / 2.30 pm – 7.00 pm
JULY AND AUGUST: from Monday to Sunday 10.30 am -1.00 pm / 2.30 pm -7.30 pm -Thursdays opened until midnight.
SEPTEMBER: from Monday to Sunday 10.30 am - 1.00 pm / 2.30 pm – 7.00 pm
Daily guided tours to the Cisterne Romane, Teatro dell’Aquila and Minitour. For information and timetable please contact the Information Office of the Museum.
It is possible to book overtime openings for private visits and educational activities for schools.
TICKETS
Unique ticket for all the museums and monuments – one year validity
Single ticket € 8,00 - Reduced ticket* € 6,00 (Polo museale di Palazzo dei Priori: Pinacoteca Civica, Mostra archeologica, Sala del Mappamondo, sale di rappresentanza***, Cisterne Romane **, Teatro dell'Aquila, Musei Scientifici di Palazzo Paccaroni)
Special ticket for one attraction € 4,00
Free entrance for children up to 13, persons with disabilities, Members of the International Council of Museums (ICOM), journalists with press card.
* Reduced prices: children aged 14 - 25, groups of more than 15 pople, members of FAI, members of Touring Club, members of Italia Nostra
** For visiting the “cisterne romane” it is advisable to wear suitable clothing because of the humid climate of the place.
*** Currently condemned because of the earthquake happened in 2016.