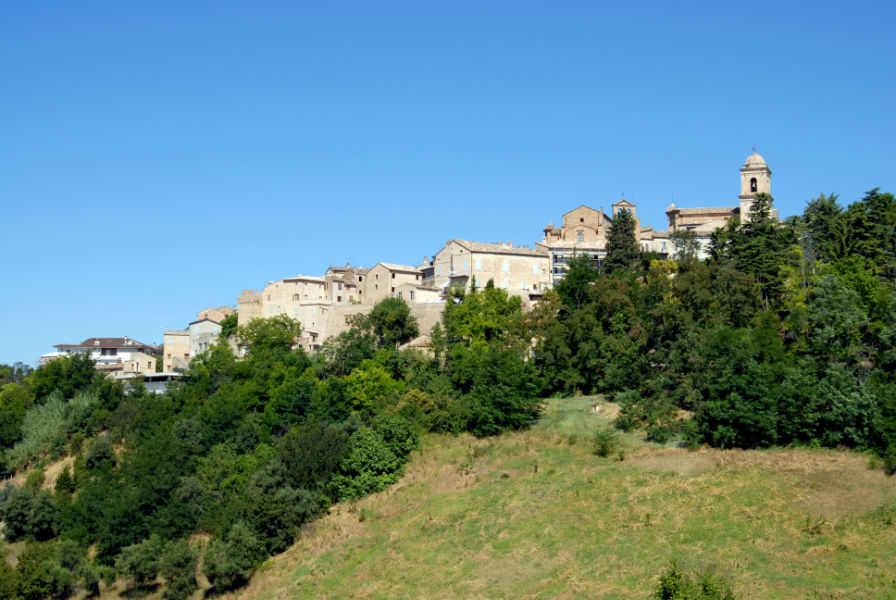 Historical Notes
Monte Giberto is a small pleasant muncipality 14 km from Fermo, 19 km from the sea and about 40 km away from the Monti Sibillini.  Certainly once lived in by the Piceni and later on by the Romans at the time of the second triumvirate (43 BC.).
In ancient times in the territory there were two castles: the one of Casale south and the one of Podio to the north-west.
There are no precise dates regarding the origin of the present inhabited part but already in the year 1,000 it was the “Castle of Monte Giberto”(probably the fusion of the two castles with the present day one), and perhaps this is where the coat of arms with the three hills surmounted by the ‘G’ comes from.
Listed, as far back as the XIV century, among the Medium Castles of Fermo, it is indicated in 1116 with its place-name which is attributed to its ancient feudatory that gave it its name.
In 1260 Fermo gave it town walls with four towers of which two still exist and have been restored.
In 1860 it became a municipality of the Reign of Italy.
The present urban centre emerges on a pleasant panoramic hill with 360º views, surrounded by green hills, between the valleys of the Ete and the Aso Rivers.
Its urban structure unwinds according to a compact, but harmonious base where the streets converge into the piazza della Vittoria (in ancient times Piazza Castello).
The main street, onto which the noble Church of S. Antonio (1742) looks out upon, cuts the town in half and leads to the piazza that, in a semi-circle, faces the Town Hall (XVIII century) with its elegant warm cotto façade (like most of the houses in the center) the vault room, home to exhibitions, concerts and meetings and the parish Church of S. Nicolo’, in past times S. Sepolcro, was restructured in the XVIII century.
The naming of some of the small streets recalls historic memories to perpetuate their remembrance (via Neghelli, via Adua, via Conie, via Addis Abeba, via Amba Alagi, via Piave, via 2 Ottobre, via Cesare Battisti).
In its quite limited extension existed 12 churches that with cells, oratories, books and bells expressed the important role of the territory of the time.

Monuments and Churches
- Church of San Nicolò (XVIII century) Constructed on an ancient parish church, situated inside the castle walls, it dominates the Piazza della Vittoria, adjacent to the Town Hall.
In neoclassical style it is an aisle-less church which preserves an XVIII century wooden altar; the image of the saint is much more antique (XVI century); there are also various works of art of major interest like the “Via Crucis”, “The Last Supper” (oil painting on canvas of 1602); a “Baptism Font” in wood (1750) and other prestigious works of art; a “CALLIDO” organ from 1797 (restored), four stucco statues of the prophets (Baroque style).
- Church of San Giovanni Battista. Rebuilt in baroque style in the XVII century at a Greek cross, it is a true jewel of grace and harmony.
The Apse and the Church tower are of the XVIII century, the stuccos date back to 1700.  The valuable frescoes, representing the stories of the Battista, are extremely important works of art of the artist Ciro Pavisa carried out in the years 1941/1942. The elegant Carrara marble altar is also of 1942.
The church has a “PACI” organ from 1876.
- Church of S. Antonio di Padova. The noble Church dates back to 1742, and has a painting on canvas with the Madonna and S. Antonio within the altar with the twisted columns.
- Santuary of the Madonna delle Grazie. Built in 1757 on the remains of a very antique chapel on the drawing of Vassalli with three naves with three altars at each side, it was given a gallery in 1875. It preserves various objects of art among which:
- The Statue of the “Vergine con Bambino” (XIV century pisana art); this is the most prestigious object here;
- Gold wooden canopy (1838), housing of the statue;
- Two paintings on canvas (2° half of the XVIII century) representing the “Natività della Vergine” and the “Presentazione”;
- In the apse, prestigious figures Marian inspiration carried out by Catini in 1916;
- A restored “Morettini” organ from 1832.