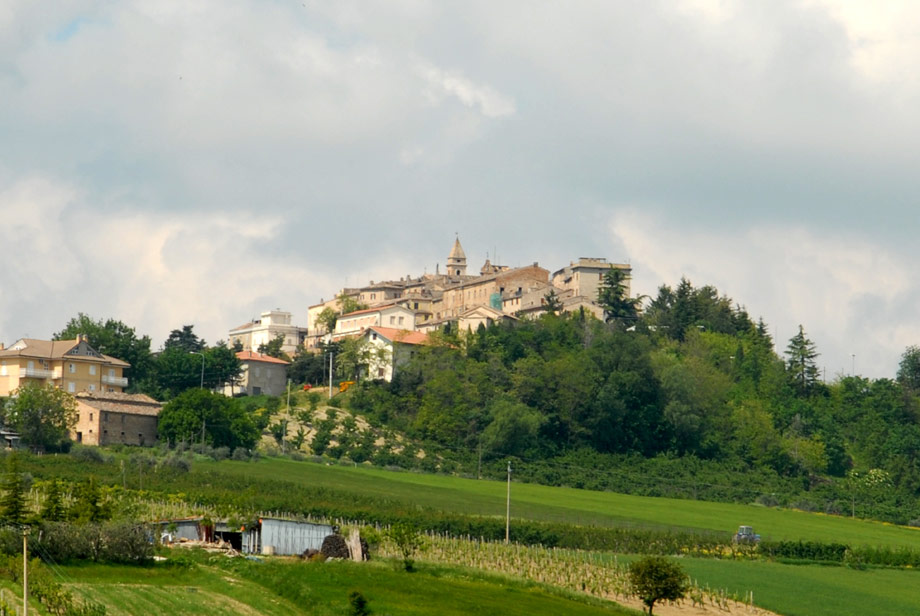 The town rises up on a spur at 485 m. (from the level of the sea) and its history has its roots in the Roman Age, witness to this can be identified in the great temple which came to light in its territory in “La Cuma” district together with many traces of Roman villas, a lot of which are still unexplored even today.  Later on, in the Lombard Age, its position allowed a development in agricultural-commercial activities not usual for those times.  From the ruins of the Roma settlements, placed in the vicinity of the Indaco, fortified centers of the territory rose up which go back as far as the VI century, to the period of the Gothic and Lombard invasions.  After the Piceni settlements and the Roman conquests of the territory, the history of the inhabited part intertwines however with the nearby Monsampietro Morico, when the Norman Count Malugero Melo from Puglia, son of Dragone d’Altavilla, reaches these lands and marries a certain Mòrica.  From the marriage three children are born and to the one named Rinaldo, actually illegitimate, the Count entrust a castle placed in the present territory of the Municipality of Monte Rinaldo.  This tale can be traced back to its origins of the feudal ruling of the Franca period.  The territory of Monte Rinaldo, considered a “border place” in the Middle Ages was disputed over by the duchy of Fermo, by the town of Ascoli and by the Abbazia Farfense of the nearby Santa Vittoria.  The castles of Bucchiano and of Montorso are from this period that towards the year 1000 were already in these vast territories.
The first document to expressly name “Monte Rainaldi” is the Rainberga gift in 1032, with which the abbess of a monastery of Petritoli gifts to the Abbazia of Monatecassino the castle and the one of “Vecciano”.   In particular in 1307 the castle of “Vecciano”, to be intended as Bucchiano, was stormed and fought over by the nearby Montelparo, whose population sided with the Pontiff.
Monte Rinaldo, as other places, during the second half of the XIII century, was dependant on Fermo and in 1333 to Fermo went the castle of Bucchiano which was very important at that time, but which was then destroyed later in 1378 by Fucaporo, tyrant from Fermo.
As the disputes and the consequent armed battles were nearly always initiated by matters concerning the borders, in 1539 these were established permanently
by Mario Favonio of Spoleto, auditor of the Cardinal Carpi.  Later on the town goes through the same matters as the other Municipalities of the area, with the ruling of the Pontificial State, the french and napoleonic invasions, which destined it to become part of the Tronto Department, dependant of the S. Vittoria Canton, up to the Ontiff reinstatement and the proclamation in 1861 by Vittorio Emanuele II of the Regno D’Italia (Reign of Italy).

Monuments and Churches
- Sanctuary late republican (II – I century A.C.) in the Cuma locality: the cultural complex consists of an arcade, of a temple and a rectangular building of uncertain destination. The arcade, of a double line of columns orientated towards East-West is m 63.50 long and m 10.10 wide.  It is formed by base wall in sandstone blocks and of two parallel colonnades of ionic-italic order the inside one, with 6,80 m. high columns (of which 4 are raised up), Doric the external one with 4,75 m. high columns (of which 7 raised up).  The west extremity of the arcade seems to have undergone some variations so as to obtain a closed ambiance on three sides and open to the East towards the inside, by means of three ionic columns (the capitals of which are dated within the second half of the I century AC), between two parastas.
At 13 m. south of the arcade are the remains of the foundations of the temple, orientated North-South maybe of the type of three cells with columns on the side of Tuscan order. [Source: Soprintendenza per i Beni Archeologici delle Marche]
Probably a thermae and resting area, it was destroyed because of the crumbly terrain especially at the time of earthquakes.
- Church Ss. Sacramento and Rosario: built in the middle of the XVIII century in baroque style, it preserves an important crucifix which according to legend was found after the destruction of the Rocca of Bucchiano and at the center of the apse a fabulous painting.
- Church Saints Leonardo and Flaviano
- Church del Crocifisso
- Church of St. Maria in Montorso: nowadays in deterioration, it preserves XV century frescoes.
- Church of the Madonna della Neve, situated in Cuma locality.

Recreational vehicle park:
- at the sports center in contrada Crocifisso
- near the archaeological area "La Cuma" in contrada Aso.