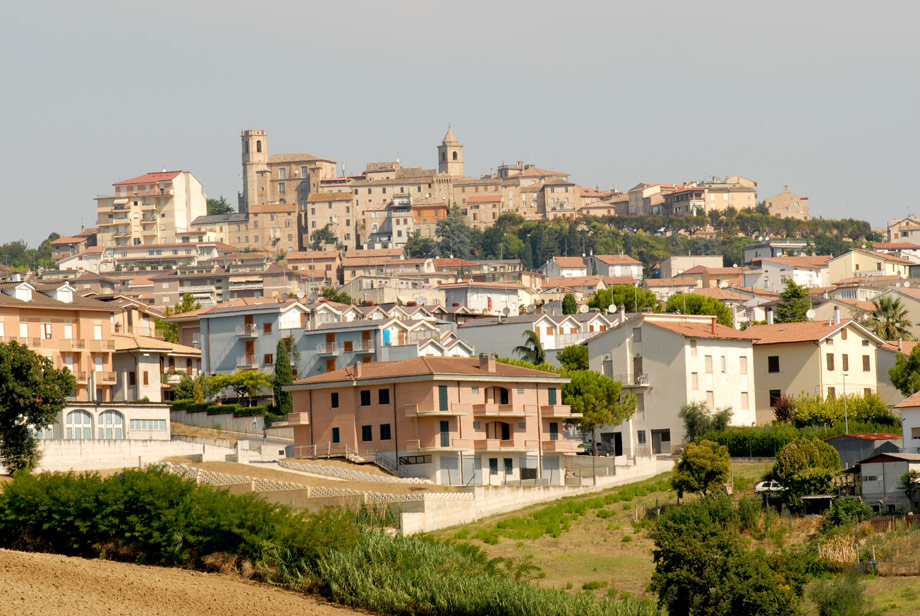 Presentation
Monte Urano is a pleasant small town laid between the green and restful marchigiane hills, ten minutes away from the Adriatic Sea and only a few Km. from the magical Sibillini Mountains.
Monte Urano, after its hundred year story, which saw it as a protagonist together and united to the town of Fermo,  today is a productive place of 8500 inhabitants, which extends over a territory of merely 16,5 kmq.  To its visitors, Monte Urano offers a productive reality in continuous expansion (numerous in fact are its shoe factory outlets), a typical and excellent local food & wine production (which follows in the footsteps of the best marchigiana cooking), together with a serene and pleasant climate.
Not to be forgotten, the characteristic medieval parts of the town, typical of every conurbation of the marchigiano hinterland.
Of particular interest the Church of San Michele Arcangelo (1860 - 1877) done on the project of the Architects Giovan Battista Carducci and Giuseppe Sacconi.
Among the cultural and tourist events the “Market of the monturanesi Footwear producers”, stands out and is not to be missed: every Friday in July and the first two Fridays in August, in the historical center of the town; the festival of the Alex Langer river park on April 25th; besides these  there are a rich series of events rigorously held during the Monturanese Summer in the open air spaces, along with the interesting cultural program (cinema d’essai, theatre, music) from the seasonal performances to the municipal Arlecchino cine-theatre from October to May every year.

Historical Notes
The history of Monte Urano runs successively parallel to that of the major center (the Town of Fermo) from which it depended; after alternating successions, Fermo in the end will acquire Monte Urano in perpetual lease, together with other castles, from the metropolitan chapter.
With the intervention of the Cardinal Albornoz strained to bring back, under the control of the Holy State, its territory so reorganizing the State of the Church, also Monte Urano, together with the other castles dependant on Fermo, was called up to take the oath of allegiance.
In the Fermo constitution the various castle were divided up, according to their contributive capacities, in Maiores, Mediocres, Minores: among the latter Monte Urano was also enumerated.

In the following centuries the ancient inhabited area grew with the enlarging of the borghi connected to the three churches outside the perimeter of the town walls and united to the original nucleus of the castle in the previous century: by now the ancient parish church, being dimensionally insufficient, it was decided on the rebuilding of the church of  San Michele Arcangelo, elaborated on a drawing of the Architect Giovan Battista Carducci and modified by the famous Architect Giuseppe Sacconi, to whom the execution o the works were  entrusted.  The new church and the opposite piazza, present center of the town, determined the connection with the old castle nucleus to which it is possible to gain access, from this side, from the Porta Nova (XVIII century).
Starting from the XVI century from the urban centers, be they castles or free municipalities, the process was initiated of  the divisions of land in the territory establishing the basis for the agricultural metayer activities, which have been maintained as main resources up to part of this present century.
Since the XVIII century, besides agriculture, on Monte Urano, was also imposed the tasks, as principle activities, to collect the lees of the wine, associated to the newly founded factory of cream of tartar, and the collection of rags, that were then sold to the wholesalers of the main marchigiane paper mills or those of northern Italy, besides to the Prato retting-pits.  From the Tuscan town they got raw materials to use in their footwear activities, the development of which brought Monte Urano to be one of the major manufacturing centers of the whole of the Picenum area.

>> March/May:  It’s Spring Time.  Cultural-recreational events under the sign of solidarity, cultural growth and environmental protection.  Not to be missed the traditional “festival at the Alex Langer River Park”, which is held every year on April 25th.

>> July/August: “Market of the monturanesi Footwear producers”, every Friday in July and the first two Fridays in August from 20:00 hours to 24:00 hours in piazza della Liberta’.  Numerous companies of Monte Urano and Fermo set out for sale, (at factory prices), the very best of their local footwear production.  The Market also foresees moments of theatrical, musical and artistic entertainment with local food and wine at its numerous and tasty restoration establishments”.

>> October/May: Season of the cinema d’essai and theatrical and musical Season at the “Arlecchino” municipal cine-theatre.
November/January: Christmas … the most wonderful story. Artistic, musical, decorative, recreational and of solidariety events for a Christmas festivity never to be forgotten.