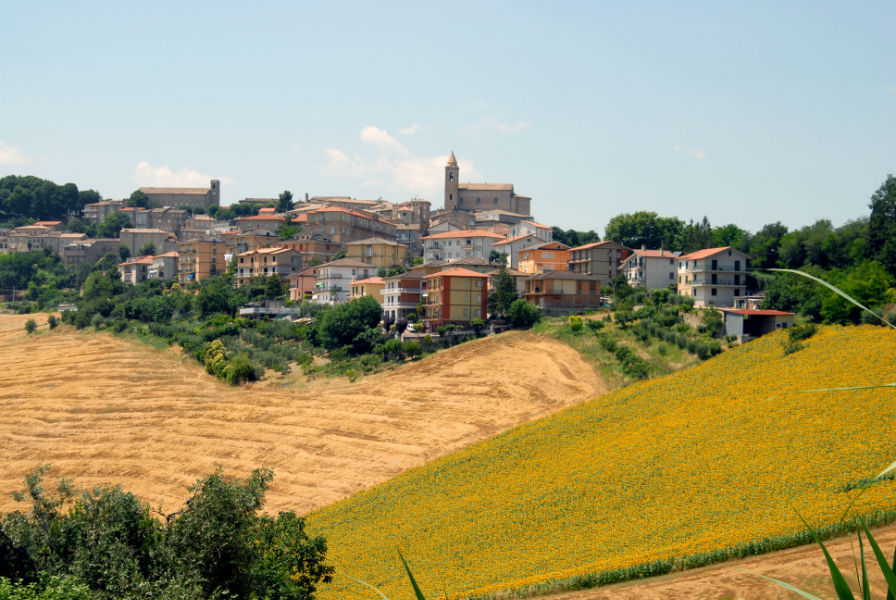 Historical Notes
The territory of the Municipality of Montegiorgio extends for over 47 square kilometers to the center of the media Valley of the Tenna.
From the summit of the town, commonly know as “Pincio”, an ample panorama can be enjoyed from the Adriatic Sea to the Sibillini Mountains, from Monte Conero to the Gran Sasso d’Italia.
The urban outlay of the historical center still preserves the original medieval structure which follows the altimetry way of the three sides of the hill on which it rises up upon.  The present shape of the town found its origins with the Farfensi, whose presence here is documented in the years 1026 - 1054.  These Benedictine monks welcomed the first inhabitants of Montegiorgio around the church of S. Maria Grande (the present day S. Francesco) and the convent, determining, as time passed, the economic flourish and the demographic increase.  The historical event of Montegiorgio was characterized by the attempt to have as much autonomy as possible from the central authority represented by the nearby Fermo.  Notwithstanding being part of the Fermana League, Montegiorgio did in fact take sides with the Emperor Federico II who compensated it by allowing it the freedom from being a Fermo dependant up to 1244, the year in which it was given back to Fermo as a prize for the faithfulness to the Church.
In the XIV century Montegiorgio is seen to be involved, at the Fermo’s side, in the battles between the Impero and the Pontificial State; the town was subjected to short tyranny by Mercennario, and then by Rinaldo from Monteverde.   In 1433 the town, like others of the ‘Marca’, yielded to Francesco Sforza but the intolerance to the Signorìa Sforzesca generated many skirmishes between Montegiorgio and Fermo until at least 1486.
Later on the town followed the general events of the Pontificial State.  With the unification in 1860 it became part of the Reign of Italy.  In 1900 it acquired the territory of Alteta, up to then an autonomous municipality.


Monuments and Churches
- Church of San Francesco: once Santa Maria Grande in Georgio, it rises up on the summit of a hill overlooking one of those most suggestive horizon views that our lands offer, named in the past colle (hill of) di Cafagnano;  of gothic-roman style, dates about the XIII century, with the monastery attached, belonging to the Farfensi monks, in 1263 it was handed over by the Abbot Peregrino to the convent monks of San Francesco.   Towards the end of the XVI century, under the pontificate of Sisto V, it underwent radical transformations which have denaturalized it from its primitive outlay.  It preserves a magnificent travertine portal from 1325, work of the master Gallo.
- Farfense Chapel: connected to the church of San Francesco.  Not all the scholars agree in the definition, with paintings from the first half of the XV century.  The legend of the true cross is illustrated in the compartments of the cross vault, a reoccurring theme in the Franciscan churches.  The most recent studies tend to put the cycle in the environment of Antonio Alberti da Ferrara, but the frescoes of the mural compartments are attributed to another hand, those of the scenes of the Death and Mary’s Assumption and that of the stigmata of St. Francis.
The entire cycle of frescoes, (which register the style of international gothic references in the Marche, leaving the mark which is typical of the art of the province in comparison with the aulic cycles which can be observed elsewhere), is characterized by a courteous delicacy and by a precious narrative unity.
In the chapel the sepulchers of the Patti, Calisti, Zenobi, Alaleona families are still present.
- Palazzo Comunale (Town Hall): a valuable historical archive can be found here; internally it is possible to observe the objects of Gaetano Orsolini: the Seminatore, the Vestale and some paintings by artists of different periods.  The Palazzo Comunale was built in the Fifties, it has taken the place of the convent of which the monumental staircase in its primitive form has been preserved, with the XVIII decorations of Pio Panfili.
- The Domenico Alaleona Municipal Theatre: built on the area of the civic palazzo, of which the ancient tower remains leaning onto an unfinished wall of the theatre.  Constructed between the years 1870 and 1884 under the project of the architect Giuseppe Sabbatini, it gets its name from the montegiorgese musician Domenico Alaleona (1881-1928). The theatre is a small jewel of neo-classical art. The decorations in white and gold stucco are by Salomone Salomoni, the paintings of the vault are by the artist from Ascoli Giovanni Picca.
- Church of San Giovanni and Benedetto: built in 1782 in brick with a sole entrance portal neoclassical style. The space is taken up by three large arches which lead into the six side chapels.  In the Chapel of the Addolorata it is possible to admire the paintings of Luigi Fontana (1827-1908) of Monte San Pietrangeli, active between the Marche and Roma in the second half of the XIX century, and the decorations by the montegiorgese scholar Nicola Achilli. The collegiata furthermore preserves the paintings of the Baptism of the Savior of 1740 and the birth of San Giovanni Battista by Stephanus Parrocel.
- Church of San Michele:  belonging to the Benedictines from 1263, later it passed to the secular clergy.  Of baroque style, the facade still preserves the original broken curved line way, internally it is decorated with white stucco.
Palazzo Passari: XVIII century, its imposing facade dominates Piazza Matteotti. The remaining XVIII century tempere, part of the rich art gallery, transferred  around the first half of the XX century by the noble family, are now visible in the board room of the Municipal of Montegiorgio.
- Palazzo Sant’Agostino: once a worthy monastery of the Augustan order it now hosts the Istituto Scolastico Comprensivo G. Cestoni and the Post Office. A XIV century historic and marble like portal and the Vestry with frescoes dated 1380 is all that remains of the church of San Salvatore, once connected to the convent, and to which access was gained from the piazza with an imposing ramp of stairs which rose up instead of the gallery.  The workmanship of the portal distinguishes itself for the originality.  The hands that hold up the side shelves with the small columns (probably other architectural elements of the façade were placed onto them), are a rare example of XIV century ‘architectural sculpture’.   Next to the portal is the small church of the Madonna degli Angeli built in the XIX century in order to host a fresco fragment representing the Madonna con il bambino, from the no longer existing church of San Salvatore.
- Church of Sant’Andrea: inside we find a painting in tempera on a gold background representing the Madonna dell’Umiltà of 1374 by Francescuccio di Cecco Ghissi.
- Church of Santa Maria della Luna (end of the XIV century): now closed as a religious place, with an interesting facade in cotto and with a five arched portals held up by small pillars with capitals which end at ground level with a floral decorated base.  The first of the arches, the exterior one,  is perforated by a flight of very light small wall arches,  the oblique sides have a run of small arches sustained by small wall columns of great scenographical effect.
- Church of San Giacomo: of Romanic layout, it has undergone various rearrangements, the architectonical assonances of the portal together with that of Santa Maria della Luna too, take us back to around the XIV century.

Local Traditions
Typical Activities: gilders and goldsmiths, craftsmanship of wire
Food and Drink: Caciù de Muntijorgio – product shortly awaiting De.C.O.
Curiosities and anecdotes: Montegiorgio is called Muntijorgio cacionà  because the town’s specialty was the production of  the  “calcioni” with broad beans which every family made at the time of Carnival.