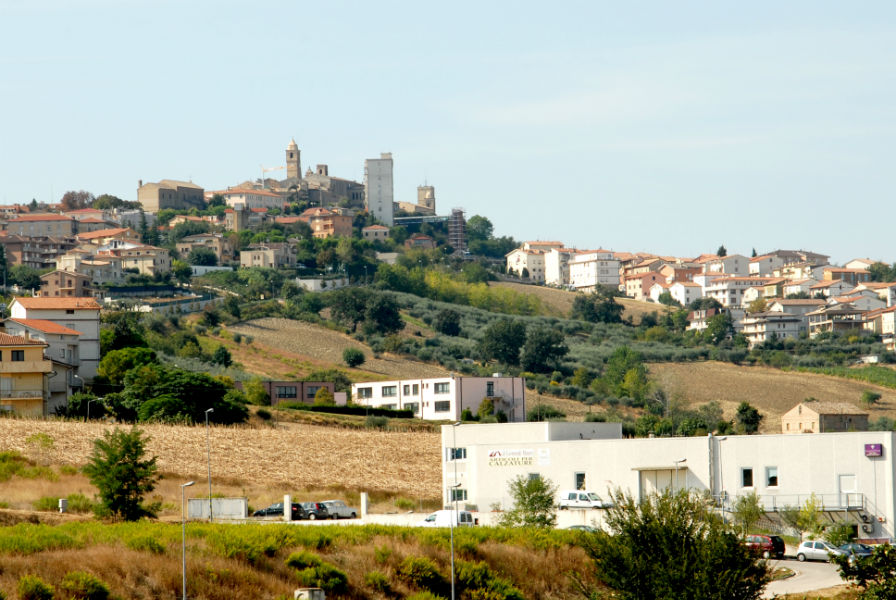 Situated on a gentle hill just 14 km from the coast, Montegranaro has a splendid panorama that goes from the Adriatic Sea to the Sibillini Mountains, throughout roads bordered by secular oak trees and characterised by the softness of the hills with expansions of sunflowers, olive groves and vineyards.

Tradition makes claim to the roman origin of Montegranaro with the place-name of Veregra, but it is a Farfense document of the year 829 that brings it into history.  In the XIII century it is a free Municipality, in 1387 it became a feud of the Venetian family of the Zeno, in 1443 it undergoes the domination of the Sforza and therefore of the Pontifical State, up to the unification of Italy.

Already since the XVIII century, Montegranaro levied itself as the centre of shoe manufacturing and nowadays, a propelling force of the Marche district, it is the heart of excellence of the national production besides being recognised as one of the most important worldwide manufacturing systems thanks to the vocation to quality and to elegance, united with an inborn creative spirit.

Artisan tradition and workmanship amongst the most qualified in the sector together with the care to details and the materials used, plus the attention to the “shape” are all elements that have always contradistinguished the “Made in Montegranaro” product.

The romanesque monuments (the Cripta of Saint Ugo with the tremendous cycle of frescoes and the portal of SS. Salvatore), the churches of a convent :San Francesco and San Serafino and baroque San Pietro,  noble palazzi Conventati, Ranier Luciani, Cruciani emerge from an urban make up of  houses  one on top of each other,  according to a sinuous and suggestive band.

The Theatre La Perla, during the winter period host an important theatre season, the Auditorium Officina della Arti hosts, in addition of other theatrical appointment, a well appreciated and very high level of concert season programmed by the “Amici della Musica di Montegranaro” whose artistic director, the montegranarese Francesco Di Rosa, covers the role of first Oboe of the Orchestra of the S. Cecilia in Rome and in the Philharmonic Orchestra of the Scala.

Veregra Street Festival, the streets and the roads of the historical center which turn into a magical forestage, animeted by national and international comedians, musicians and  jugglers: this is the Veregra Street Festival: the qualified and renowned festival of street theaters of national and international importance is held in the last week in June. (www.veregrastreet.it).

Veregra Street is not just a spectacular kermesse, it is also an occasion to get to know the territory, the artisan products, the local and ethnic typical food and wine, the cultural and environmental goods of a welcoming and inimitable rich territory.   A unique festival therefore, for its temporal duration and artistic quality and for the involvement of an ever more dynamic and creative network of a plurality of supporters: thanks to the project “Open Street”, which the municipality of Montegranaro has set out in the two year period of 2010-2011, Veregra Street has in fact acquired a further international dimension, so asserting itself as one of the points of reference in Italy and in Europe of Street-Art. (www.veregrastreet.it)

The distinctiveness of the sportsmanship in Montegranaro is made up by the extremely high number of sport associations and of disciplines carried out – ranging from basket ball to football, from volley ball to the competitions on the baseball and softball diamond, on to bowls, cycling and many others – many of which have become over time, protagonists of very high levels of championships, like the Sutor Basket, which has been in the A1 Series since the 2006/2007 season.

Nature Trail: Situated in the splendid frame of the ‘Parco Fluviale del Chienti’, (Chienti River Park) the small Torrione lake is an enchanting place, far away from the town’s traffic, where it is possible to walk and run, or simply to enjoy a picnic with family and friends. Inside the area it is possible to observe the flora and the fauna typical of river expanses