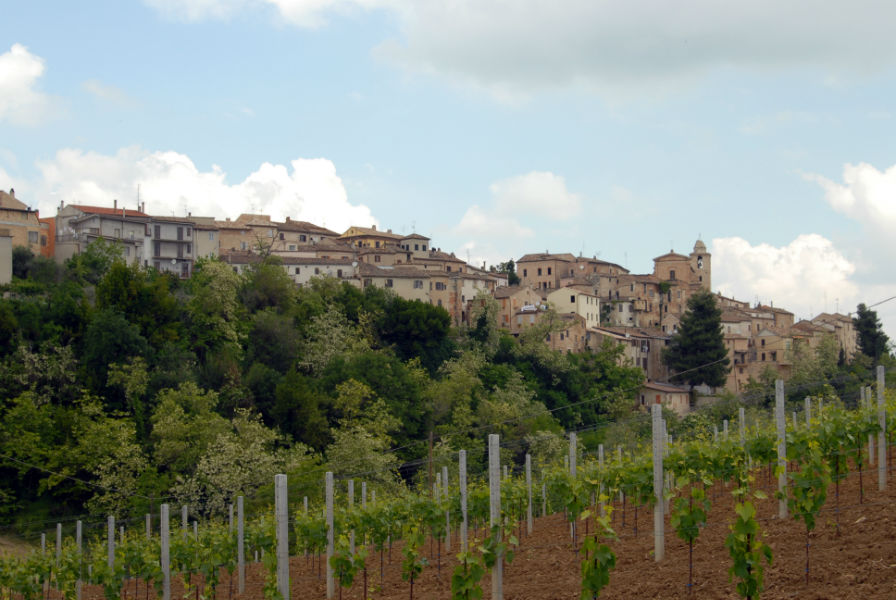 Historical Notes
Proud and rich in historical influences Ortezzano rises up at 301 m. upon sea level; the small but lively Municipality today counts about 840 inhabitants and sees its origins losing themselves as far back in time as the Picenum  Age ( IX-III BC).  The place-name, made up of a landed name, with the typical suffix -ano, latin -anum, gives us clear indications of this territory in Roman Age: divided into ‘centuries’ (a unit of a hundred roman soldiers) and distributed to the veterans, it was the ideal and preferred place to build rich rural villas, one of these had to belong to a non better identified Ortentius or, more probably Horatius.  Starting from the VIII century the territory of Ortezzano was part of the vast area which became part of the number of the Farfensi dominions.  In this area Farfa owned: the curtis Sanctae Marinae vel Mariae and the curtis Sancti Gregorii de Ortezzano at least until the beginning of the XII century.  From IX to the XI century the Dukes of Spoleto erected castles on the strategically relevant high grounds and also Castrum Ortezanii, in 927 AD was equipped with castle walls to protect the inhabited area from the frequent raids of Ungari, Saraceni, Normanni and other occasional enemies.  The historical events of Ortezzano, later on followed those of the Fermano and those of the Pontificial State, to which it became definitively part of right up to the unification of Italy.   It suffered numerous ups and downs in the period of the municipalities, with Malatesta, with Battistello of Ascoli, with the Sforza of Milano and with the Lautrek that attacked it and destroyed it completely.  The métayage system, universally widespread here, from the beginning of the XV century and also due to the organization of the territory in smaller and smaller farm holdings, and to the settling in on them of colony families, all guaranteed the control of every meter of land giving life to an exceptional variety of crops which still continues to be present nowadays.

Monuments and Churches
- Remains of the Castle erected around a watch tower (IX century) are: the ghibelline tower, the XV century walls, the portals and the vaults in Gothic style.
- Church of Carmine, done by the Papetti brothers in the XVIII century, preserves xilografie of Ceschini and a ‘marattesca’ school painting.
- Church of San Girolamo, the Parish Church rebuilt in 1773, preserves over a side door the most ancient coat of arms of the town.
- Church of Santa Maria del Soccorso, in the piazza.  It is of Farfense origin and was rebuilt about 1450 like a Greek cross; in 1759 the bell tower was erected.  It withholds the very first painting on a wood panel of Vincenzo Pagani (1509), a Via Cruces of Roman school and a partial fresco of the XV century.
- Cistern, first Picenum settlement, it is a contrada where there is still a fountain, part of the town walls and a small church.

Other attractions worth visiting
- Casa Carboni: Birth place of the famous latinist Giuseppe Carboni, born in  Ortezzano in 1856.
- Porta da Sole: Worthy example of a Gothic style entrance with a pointed arch and a cross ogival vault.
- Ghibelline Tower: at a pentagonal base it is the symbol of the town.
-  War Memorial of all the wars: A Monument planned and created by the artist Marcello Savini, sculptor and painter of renowned fame, born in Ortezzano in 1928 and who passed away prematurely in 1995.  This monument is the only sculpture carried out by the artist that did not belong in the figurative genre; named “Il Fiore”, (the Flower) to indicate the provenance of the inspiration: two flower petals, symbols of the peace and justice, which wrap up and surround the earth globe.
- Fonte tre cannelle (drinking fountain) : the font of the  "Tre Cannelle", that gets its name from the fact that it has three taps for the water, it is situated in the countryside in the Casali district.
- Fonte da Bora: The Bora fontain was presumably built in the XVII century, like the coat of arms of the Papetti family, placed over the basin