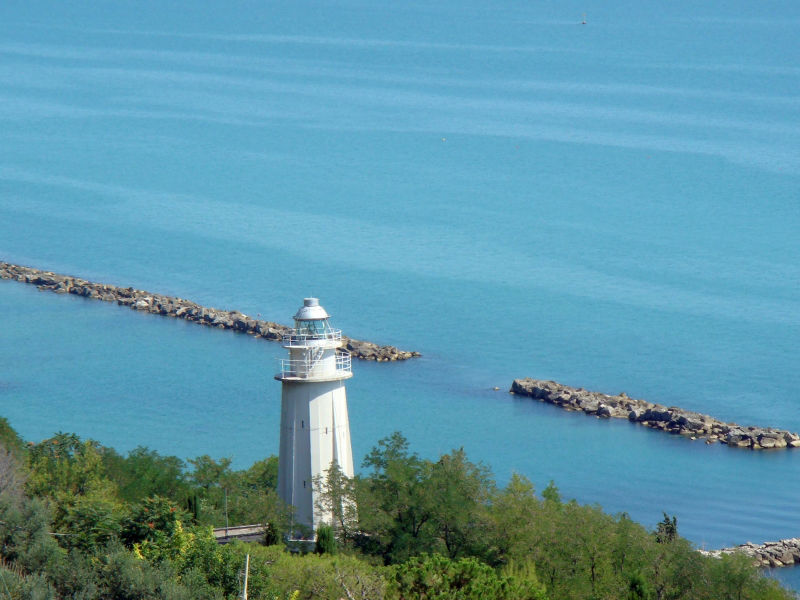 During the Middle Ages, Pedaso rose up with its ancient Castle on the hill overlooking the sea nearby to the cliff called “the Cupa”.  Just like all the other Fermani castles on the coast, it had the role of guarding the sea area with a watch tower later transformed into a light house in 1877.  Towards the end of the XVIII century, following the continuing collapse of the old ‘incasato’, it begins to develop lower down, along the coast, where the seafaring ‘borgo’ is born which even today still has the initial urban disposition.

NOT TO BE MISSED

Church of Santa Maria and San Pietro Apostolo, of neo-gothic style, the initial building commenced in 1897 and was finished in 1929; it withholds a “Sacra famiglia”, painting on canvas attributed to the painter Filippo Ricci.

The Lighthouse built in 1877 and destroyed by the Germans during the last war to then be rebuilt later on.

Ex sede comunale (town hall) with tower and clock, in the historical centre.

Astronomical Observatory, on Monte Serrone, besides being a powerful observation instrument, it is particular for the photovoltaic energy plant that feeds it.

Porticciolo, (small harbour) situated near the outlet of the river Aso, it is a quay equipped for small fishing and for recreation boats.

The Cantautori Promenade of the XX century, a route of nearly three kilometres next to the seaside accessible by subways dedicated to the main song authors of our time. It connects the municipality territory of Pedaso to Campofilone.

‘Sentiero del Semaforo’, (The Traffic Lights Path) a historic path, recently reopened to the public which can be found south of the town, near the maritime Lighthouse. It connects the built up area to the summit of Monte Serrone where the traffic light was installed, guard post of the Marine Military.

Hydro-Power Plant, built in the second half of the ’20s, it can be found along the Strada Statale 16. Entirely covered in travertine, it is built in Art Nouveau style. It prevents the emission into the atmosphere of 5000 tons of carbon dioxide per year.

Nature route of the hydro-power basin, a nature trail created in cooperation with Enel Green Power, which circuits along the borders of the artificial lake that feeds the plant. There are Poster Boards that explain the modalities and the functioning of the new technologies for the production of clean energy.