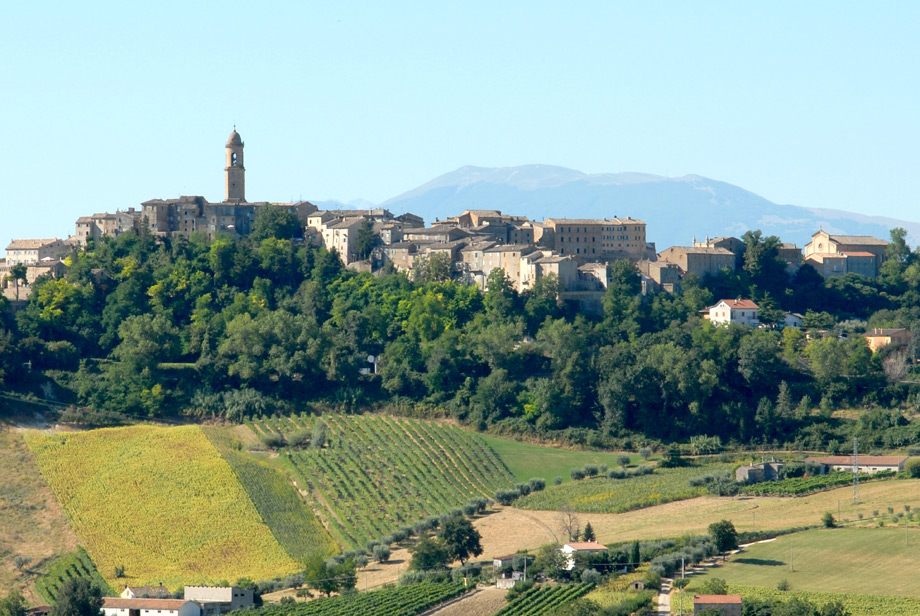 Historical Notes
Situated in a territory already diffusedly lived in during the Roman Empire, the present day historical centre of Petritoli started its formation during the high Middle Ages, when, thanks to the work of various orders of monks, and especially the Farfensi, the unification of the three previous villages of Petrosa, Petrania e Petrollavia was achieved.  This process, completed in the XI century, gave life to a castle of great strategic importance, which had ample administrative autonomy on the surrounding territory, under the direct guardianship of the Holy See.
But very soon, again still during the XI century, Petritoli lost its autonomy, passing under the Episcopal control of Fermo, to which it linked its destiny for more than four centuries.  During this length of time the ‘petritolesi’ tried in every way possible, even going against the fermano army, to regain their autonomy, but always without a positive outcome.  Simultaneously it suffered numerous skirmishes from different foreign armies’ intent on conquering the fermano territory.
The situation changed dramatically when in 1537 pope Paolo III Farnese, thankful for the help that the ‘petritolesi’ had offered him a few years before, conferred to Petritoli the title of Land.   The ‘petritolese’ community so maintained the new autonomy until the end of the century, when it went back under the control of Fermo. During the XVII and the XVIII century Petritoli remained however one of the “major castles” of the Fermano area, thanks especially to the numerous and important religious institutions that were active therein.
With the arrival of the Napoleonic troupes, sustained by the local political class, Petritoli became a seat of Canton, one of the eight administrative centers of the Napoleonic Departments of Tronto.
The revolutionary spirit diffused by the French did not lessen with the reinstatement of the Pontificial State and with the return of the control by the Bishop of Fermo.  Petritoli was in fact one of the main centers of both the Marchigiano and the national ‘Risorgimento’ (= 19th century movement for Italian national unity and independence, begun 1815).   Thanks to many people from the town, and especially to the figures like Filippo Mannocchi Tornabuoni, elected deputy to the Constituting Assembly of the Roman Republic of 1849, and Costantino Tamanti, who took part in the armed fights even within the rows of the ‘garibaldini’, Petritoli became part of the new united state.
From 1861 the town came to know a political, cultural and artistic liveliness which can still be felt nowadays in the different buildings in the historical center and through the writings left to us by a great scholar of the picenum folklore, Luigi Mannocchi.
The historical events of the first half of the XX century left deep indelible signs in the souls of the ‘petritolesi’, who however did not abandon without help the refugees who came from the trevigiano municipality of Vidor, with which they are now twinned.
In the last fifty years, notwithstanding the various rapid changes in society, Petritoli has continued to maintain great social and economical importance in the valley of the Aso River and in the Fermano area.
And all this can be duly noted upon visiting these characteristic places, re-living the traditions, discovering the typical artisan and ‘food and wine’ products, but more than anything else, by meeting the people of this “balcony onto the Valdaso” that sums up Petritoli.
Pierluigi Vitellozzi

Monuments and Churches and places worth visiting
- Church of  S. Anatolia
- Church of  S. Maria in Piazza
- Church of  S. Maria Assunta
- Church of  S. Maria ad Martires
- One of the most important meeting places and more than anything else a meeting-place for the youth of Petritoli is the "Parco della Rimembranza" (Memorial Park) situated in the east part at the entrance of the town which represents the emblematic encounter between nature, fun and history. Especially in summer this cool place offers peace and rest to all those who are looking for relaxation and entertainment; equipped with a magnificent fountain and various games for the younger public, with a breathtaking panorama of the Fermano countryside, from where, on the clearest of days, it is even possible to see the Adriatic, to the practicalities of a very green garden usable by all those who wish to rest and enjoy the hospitable climate of Petritoli.
- Tre archi (Three Arches): Sceneografic entrance into the town, done in 1872 in neo-gothic style built between two XV century bastions.
- Torre Civica (Civil Tower): Erected in 1831, from its over 40 meters of height, it is possible to admire an unforgettable panorama.
- Theatre of the Iride: An 1873 Temple of art, a wonderful work of art of worthy artists, it is to be remembered amongst the most elegant historical theatres of the Marche region.
- Palazzo Vitali: Palazzo of the end of the XIX century built in the Venetian gothic style of XIV – XV century.
- Church of S.Andrea: The church, previously dedicated to S.Chiara, stands out for its internal decoration of the end of the XVIII century, a manifest of neo-classicism.
- Palazzo Comunale (Town Hall) : In the Town Hall, accomplished from the end of the XVI century, some of the rooms of the ex convent of the Clarisse nuns are still visible,  in particular the XVIII century room of the wooden choir stall, and the rooms which host the Municipal Exhibitions.
- The XVI century Public Palazzo: Restored by Pope Paolo III in the first half of the XVI century, it manifests a rich façade, on which we can also admire a most beautiful solar meridian (nowadays the palazzo is a private residence).
- Church of S.Maria dei Martiri: The Franciscan temple (XVI – XVII century) is a 360° connubial both mystic as tangible between art and faith, thanks especially to a precious Callido organ, to an enchanting XV century transported mural painting representing the la Madonna del Latte, and to an extraordinary XVII century wooden caisson  ceiling.
- Palazzo Mannocchi: Birthplace and palazzo of the family of one of the most important folklore scholars of the Marche: Luigi Mannocchi (1855 – 1936). On the façade a plaque is visible dedicated to Costantino Tamanti (1829 – 1882), famous ‘petritolese’ patriot.
- Exhibition/ Art Gallery Vitali: The most ancient palazzo of the Vitali family hosts an exhibition of objects, especially a XIX century extraordinary wedding robe, which will bring you into the daily life of this noble family.  It is also home to the exhibition of the artistic paintings of Sharon Kantor.
- Santuary of the Madonna della Liberata: The Sanctuary of high medieval origin, was rebuilt in the fifties of the XX century. Internally the painting on canvas of 1529, representing the Madonna della Liberata reminds us the two years before the Virgin protected the ‘petritolesi’ from the French troupes and the plague.