A walk on the cobbles amongst the 'borghi' and the castles of the fermano district. | Itinerario

it de
A walk on the cobbles amongst the 'borghi' and the castles of the fermano district. 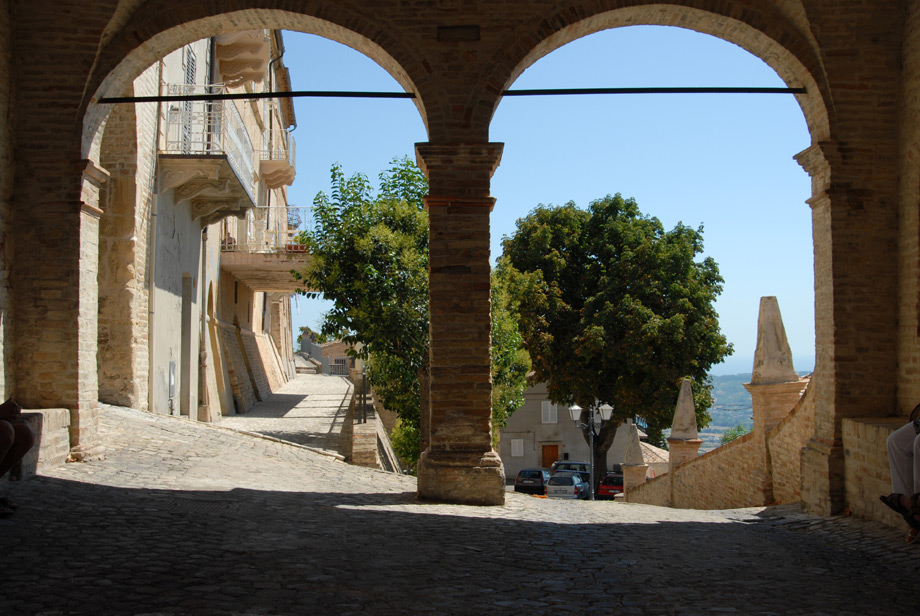 An itinerary in search of antique manor-houses and fascinating ‘borghi’ (= boroughs) which takes us through history and far away from the frenetic rhythms of the city, on a slow journey amidst church towers and towers, from one hill to the next.

The historical ups and downs have left behind an abundant scattering of fortresses and castles in the whole of the region, in every small ‘borgo’ tales are told of wars, treaties, battles, fights and factions, but also about a population dedicated to work and religion.  This route offers a kind welcome to serene territories soaked in precious testimonials of the past.

From Fermo, on the SP239 we can reach Torre San Patrizio in about20 minutes: the very first siege goes back to the VI century; the long tapering shaped castle was built about the V century on the summit of a small hill. One can gain access to the fortified walls from Porta da Sole, a main street goes across its entire length with short perpendicular streets with houses isolated and in groups.  Not to be missed is the view from the large balcony over the Sibillini Mountains.  Outside the walls, is Villa Zara where Margaret Collier lived, this countryside was the scene of her famous book “Our home by the Adriatic”.

Taking Contrada Bora we arrive at Rapagnano; the castle here was disputed over for years by Fermo and Montegiorgio, up to the conquest by Carlo Malatesta.  The boundary wall has an ovoid shape; a tower crowned by a jutting cornice and flat-topped battlements indicates the position of the Rocca.  The compact blocks open up to make room for the central square, probably built in the VIII century.  Just five minutes away we come across Magliano di Tenna: legend has it that around the year 1,000 a mercenary captain named Malleano founded the castle.  Positioned on an isolated high peak that dominates the lower Tenna Valley, it maintains a medieval appearance, with its walls and towers becoming absorbed into the enclosure.   To get to Grottazzolina we go across the SP239. The castle here was erected by the Farfensi monks around the X century and was later absorbed into the expansion of the inhabited centre; on the inside, the boundary walls disappeared together with the Municipal Palazzo, but there is still evidence of the Azzolino Palazzo.

Following the Contrada Capparuccia and the Contrada Fonte we can get to Ponzano di Fermo in just a few minutes.  Its history is marked by the Farfense presence, by the profound bond to the town of Fermo and by the importance of its waterways for which so many battles were fought.  One gains access to the medieval ‘borgo’, closed off by the walls, by a ramp which joins the old castle to the ancient Church of Santa Maria; the Palazzo of the Community, with its entrance embellished by a refined cotto archway, should not be overlooked.

Going towards Monte Giberto along Contrada Maltignano, we can get to Petritoli in just 10 minutes; once again, it is thanks to the Farfensi that the castle which had such great strategic importance in the Aso Valley was erected.  Over the centuries the town has become structured around the most ancient part placed at the summit of the hill, the centre of social life is around the Rocca area and here the 40 meter high Civic Tower was erected allowing an incomparable view.

About a quarter of an hour separates us from Moresco if we follow Contrada San Savino and the SP56.  The fascinating thing about this location is that its appearance seems to have come to a halt in time; the castle in fact is practically as it was in medieval times.  The ellipsoidal shape resembles a vessel that points us towards the Adriatic; of the two remaining towers, we can visit the more ancient one, a good 25 meters high, of a heptagonal shape; the other one is named the Torre dell’orologio (the Clock Tower).

Here our journey, which has taken us back in time like the errant knights in legends, in the myths and in fables of the ‘Fermani’ castles, must come to an end.

We advise spending 2 days to enjoy this route satisfactorily.