Theatre and Music throughout Marca Fermana

The Fermo area, like the entire region of the Marche, has always shown a keen interest in theatre and music, insomuch that by studying the history of the various urban centres it immediately jumps to the eye the constant ability to respond to the tastes of a critical audience and the ability to regularly redefine the places used for shows and musical performances. 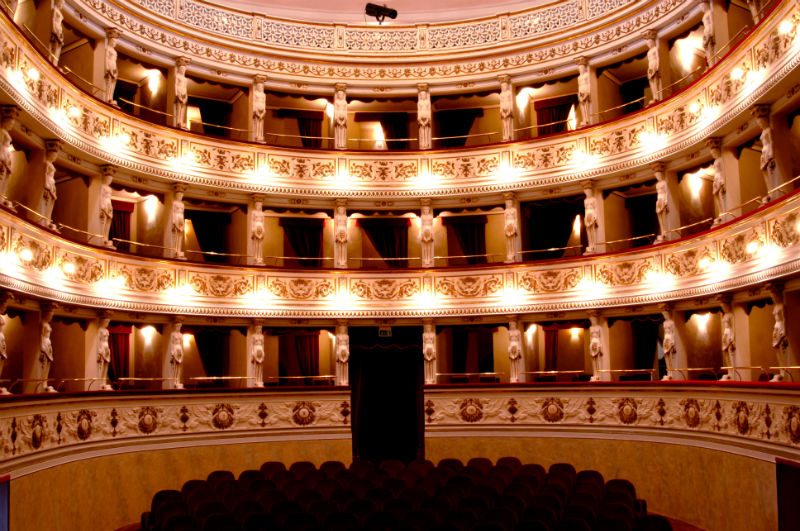 The remains of some of the theaters from the Marche, go back to the Augustan age, including the Falerio and Firmum one, which make it possible for us to witness the passion of the Romans with regards to the entertainment that reached its peak during fairs and festivals.

Not even in that period of time that goes from the middle Ages until the Renaissance did the passion towards plays run out. In fact, while during the XIV-XV century, it was essentially sacred stories, which were represented on the Church-squares, with the aim of educating the spectators to Christian morality, around the second half of the sixteenth century there was a return to the profane shows, staged in the piazzas, courtyards and the stately halls, occasionally used for theatrical environment.

In fact there are numerous documents, which verify, around the second half of the 16th century, the increase of the first permanent theaters within public spaces like the Palazzi di Podestà.

In a period of considerable urban renewal, as in the XVIII century, new public theatres, which, with their internal architecture, still exposed the distinct social groups, were built at the request of condominium corporations and municipalities. In fact, to attend a concert or a play from the top of the first or second order of stages, to converse placidly in foyers, cafes and meeting rooms, decorated with fine furnishings, represented for the town's nobility a chance to show their social status.

In those meeting places and of cultural exchange, the ladies adorned and swathed in their precious silk dresses, discussed with stylish cavaliers, while boasting esclavage, refined cufffs and moving with grace the inescapable fans.

During the eighteenth century, above all, the Fermo territory staged melodramatic performances, which were much less expensive than the serious works represented on the stages of major Marche theaters. While the oratories scenes always had a certain consistancy, it was necessary to wait until the second half of the eighteenth century to be able to watch the bernesc farce-like operas and dramas.

The small towns scattered in the Fermo territory, however, were able to attend concerts, operettas or opera seasons in new permanent theaters only from the beginning of the second half of the nineteenth century. In addition, these facilities were designed to adequately accommodate not only the nobility but also the representatives of high and medium bourgeoisie, as well as those from the crafts and the trade.

Theatres, therefore, through the addition of galleries became a meeting place and cultural growth to a much broader range than that of the previous century.

Because of its importance in musical and theatrical tradition, the Fermo territory is still, even today, covered with theaters which host a variety of shows and which, due to their history, architecture, precious scenic apparatus, and refined plasterand pictorial decoration, deserve to be discovered in all their charm, perhaps while being elated by the famous, local music composers.

Yet visiting the theatres and discovering their history, does not only mean getting to know an architectural work, embellished with frescoes, stuccoes, velvets and painted screens. Going into a theater and investigating its past, is a way to reflect on its ethnographic nature and on the fact that it has been a venue of fiction, spectacularity, staging, but also a faithful witness to the passage of time, the evolution of thought and human ingenuity. The theater has been a major meeting place that has favoured the birth of ideas, the exchange of emotions and the dissemination of a musical culture, which still exists.