The historical organisation of the towns in the Fermano territory

From the middleages to the XIX century the most illustrious families of the territory around Fermo have left traces of their power and their social-political influence through their residential buildings erected according to the taste and needs of the time. Fermo, since ancient times, due to its favorable geographical position responded to precise military-strategic requirements and over time this prerogative allowed it to play an important political role. 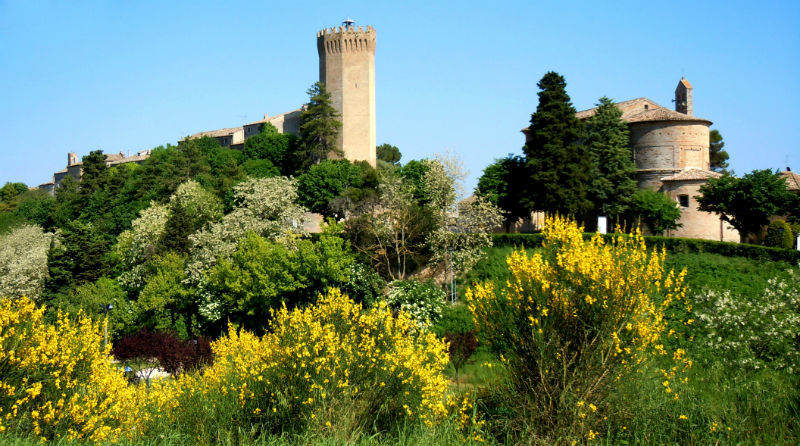 Its territorial hegemony, in fact, has been exploited in every historical phase and particularly during the middle ages, when it was the capital of Marka Firmana and had under its jurisdiction first one hundred and forty, and later with the acquired autonomy of Ascoli, Camerino and Macerata, about eighty ‘Castelli’ (Castles).

The encastellation was a "global phenomenon" closely tied to a serious administrative shortcoming in the X century, which led to the populations scattered in ‘vicos’ (villages) to gather together into ‘castra/castella’, fortified civil structures that protected from raids and military sieges those who were not able to look after themselves.

The Castle/village in the XXI century became stage of that legal and political organization of self-government, which took the name of “Comune” and gave the Fermo area that territorial configuration, which is still preserved. The Castle and its extensive network of ‘castra,’ which primarily were to serve as efficient tools for defence, between the XXII-XXIII centuries were designed as places for the houses of the wealthy and especially as impressive manifestations of their power.

Between ‘castras’ and forts today there are approximately fifty-five castles in the Fermo area that you can admire and they offer visitors a clear idea of the authority held by Fermo during the medieval period. They are scattered in an area extending from the Sibillini Mountains to the shores of the Adriatic and from the lower Valley of Chienti to Tesino. The Castella are welcoming little towns that very often have retained the name and town layout of the era; not infrequently they have expanded covering new portions of land, while still allowing us now, to perceive their medieval layout.

Furthermore, strolling along the main road of a castle, near the largest square, or close to the walls the most influential family buildings, dating back to the early middle ages, are still visible, which developed in length rather than in depth and that show a greater number of storeys compared to other dwellings. The impressiveness of the façades, the sober elegance of their ornate portals, along with the presence of gardens and elegant loggias, well represent the prestige of those who occupied them.

Between the XV and XVI century the interest in agriculture was revived and as a natural consequence, they returned to building in the countryside. At first they built tower-houses commonly called "colombaie" (dovecotes) or "palombare" which in addition to being a shelter for farmers and animals, served as an instrument of defense of the surrounding territory. The proliferation of an overall state of insecurity prompted the population to also fortify the windmills scattered throughout the countryside, which were a source of indispensable flour for the whole community.

These structures are still visible and rise up as massive structures along the River Tenna, in the vicinity of Amandola and Montefortino. The bourgeoisie land-owners, on the other hand, invested their income in urban works such as theatres, vanvitellian type mansions, churches decorated with well-made, valuable paintings and sculptures, but also in vacation homes in the nearby rural areas. At first these noble houses not only served as an efficient instrument for the control of manufacturing activities, but were also a perfect place to retreat to recover from the stress of urban life.

In the XVIII century, however, with the development of their social-economic position, the bourgeoisie began to commission sumptuous villas and elaborate gardens with the intention of competing with the decadent aristocratic class. Going through the suburban areas of Fermo you come across several vacation homes that placed on rolling hills, can barely be seen between the walls and the sturdy trees that surround them.

Often long green avenues enhance dramatically the buildings, kept from the public by imposing gates. The villas are usually centrally located compared to other buildings, which originally may have served as warehouses, tool sheds or accommodation for the domestic staff. Of considerable interest are the gardens stormed with bougainvillea, palms, roses, bushes from where statues and gushing fountains emerge, patchworks of ground with oranges and lemons, but also nymphea, aviaries, berso’ laced by vines and small frescoed chapels.

Going towards the coast you can admire the nineteenth century villas that are dotted along the coast adorned with palm trees and oleanders. In fact, in the late XIX century and the beginning of the next century there was a mass move from the hills to the plains, which underwent a significant increase in building, destined to increase with the construction of the railway.

Consequently, the beach tourism caught on, which brought the precepts of that artistic movement in Italy named Art Nouveau. The small villas multiplied and acquired very different appearances to those of the holiday residences of the past. Often these were single-family houses that tended to grow in height and this verticalisation was often linked to the presence of a new architectural element: the ‘roof terrace’. Frequently the outer walls of the complex had Art Nouveau style decorations with flowing and sinuous lines, which mirrored the shapes resembling natural entities such as leaves or seashells that were often the result of original ideas from local artists like master Adolfo De Carolis (Montefiore dell'Aso, 1874-1928, Rome).