From the sea to the light blue mountains is the panorama that flows in just a few kilometres through the Marca Fermana territory. Mainly sandy beaches, mild, rolling hills, up to the Monti Sibillini slopes, and then further up over the 800 metres where we find the highest inhabited places of the Fermano, where they meet up with the mountains. Brief is the distance, which separate them from sea through the hills, rich and various is the vegetation, ample the green spaces and the paths for those who love to walk, or do some kind of sport or simply immerse themselves in Nature.

The landscapes of the Fermo territory, like the whole of the Marche region, have a very varied morphological conformation, so also deserves to be discovered through a path that is able to unravel itself in every nuance. 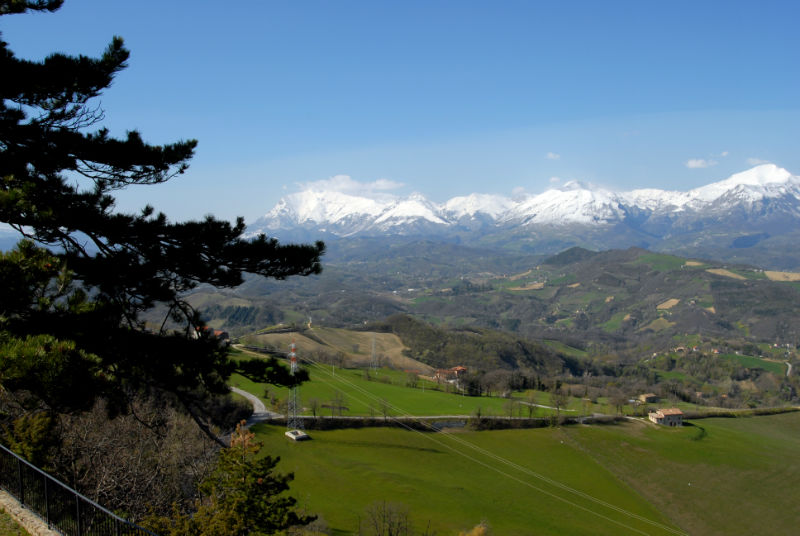 The coastal area with its mild climate and fine, golden sandy beaches is broken up by rocks, pine forests with their fresh and intense aroma and dotted with ancient port towns and medieval blocks perched on terraces that slope down to the sea. Visiting these places you can discover traces of Roman and Picenum periods, you can see the towers of the castles that rise from gentle hills, admire the remains of settlements developed in the small towns of the Via Lauretana around the second half of the XVIII century or let yourself be fascinated by the seaside buildings in Art Nouveau style.

The construction of the railway along the coastline towards the end of the IXX century, has allowed the development of the seaside tourism that has brought with it ideals like progress, wellbeing and peace, which are typical of the Belle Epoque.

Despite the passage of time and the impact of the two world wars the maritime areas of Fermo have always kept faith in those three ideals, seeking to evolve in favour of peace and well-being of its inhabitants and of course of the tourists, which each year crowd such places.

It's no coincidence that the FEE (foundation for environmental education) has awarded to towns like Porto Sant'Elpidio, Fermo and Porto San Giorgio important awards such as the "blue flag for beaches" and the "blue flag for mooring places" which guarantee the quality of the water and the coast, excellent amenities, meticulous security measures, strong environmental education and satisfactory information points.

Near the coastal strip besides the sea and the beaches, you can admire forested areas that the Marche region has decided to enhance and safeguard due to the presence of rare Mediterranean vegetation, which risks becoming irreparably extinct.

Going inland the blue and gold of the coast give way to an agricultural landscape that sheds its cloak with every season and features a concert of colors ranging from the gray-brown clay hills to the green and silver olive groves to the tender pink of the orchards in bloom. Winding roads cross through a man-made landscape that testifies to the ancient and zealous work of man, who with ingeniousness and perseverance has exploited a territory, already in itself, particularly fruitful. On rocky ridges and hills embraced by groves of oak, ash and black hornbeam, soar as bronze crowns, places of medieval features. Along the clay countryside of the Fermo territory, those geomorphological manifestations, which are commonly called "mud Volcanoes", arouse much interest: formed due to cold flow of mud and water. If you then move your gaze westwards, you can admire those blue mountains that Leopardi also quotes in "Le ricordanze" and remain enchanted by their silvery rocks that conceal ancient legends known not only by an ancient oral tradition, but also by writers such as Antoine de La Salle, Leandro degli Alberti and Andrea da Barberino.

To give those mountain groups that typical blue-gray are the limestone or calcareous-marl rocks attributable to the lower Mesozoic Tertiary. The chain of the Sibillini Mountains, with peaks reaching 2,000 meters on average, extends along a rather large area that incorporates the areas of the provinces of Fermo, Macerata, Ascoli Piceno and Perugia. This territory, which includes 700,000 hectares on the whole, is protected by the national park of Monti Sibillini, a body formed on 6th August 1993 that deals with the conservation and enhancement of its historical, cultural and environmental identity.

In fact the Park is committed to protecting not only the naturalistic areas that encompass a variety of floral and faunal species, but to preserving the various municipalities of medieval origin that are scattered throughout the territory and represent a fascinating fusion between natural scenery and the man-made environment.

To fully enjoy the beauty of these places and choose paths aimed at every type of need, it is advisable to contact the Houses of the Park that provide fundamental information to visit the mysterious places protected by that institution.